How to add a glossary through the Wordly portal.

Glossaries allow you to customize Wordly’s speech recognition to include your organization’s unique terminology, such as the special phrases or names of products, people, and departments. Glossaries are custom libraries which significantly increase the accuracy of transcription results. Without a glossary for reference, Worldly may be unable to transcribe unique phrases, words, and terminology.

To access the Glossaries page from anywhere within Wordly:

Once you’re on the Glossaries page, click +Add Glossary (

) to get started. This will open up the following menu: 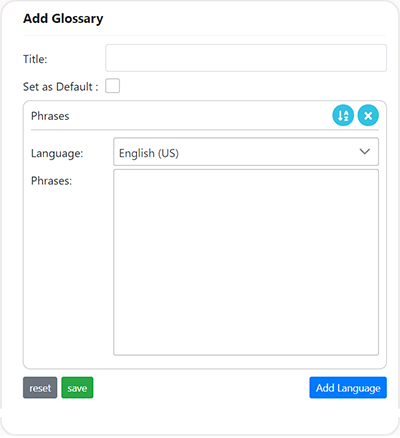 Enter the following info to create a glossary:

Enter the name of your Glossary. A title is required to save the glossary.

Make sure to only check the “Set as Default” box if you intend on using this glossary often.

Choose the language that the presenter will be speaking in.

Add the phrases and terminology that you think Wordly will need help with transcribing. This can include names, acronyms, terminology, and abbreviations, but must be added as they’re spoken aloud naturally.

Include names that you’re unlikely to find in a dictionary. This includes:

Include terminology that is “specialized”, such as:

Acronyms should be included on their own, without their meaning. Examples:

Abbreviations include two-letter acronyms that are spoken aloud, such as:

Only include abbreviations you expect will be spoken aloud as abbreviations. For example, we can expect people to say “Nevada” and not “en vee” (NV), so “NV” should NOT be included.

However, we can expect people to say “vee are” (VR) instead of “Virtual Reality”, so “VR” should be included.

Whilte the examples above include parenthesized phrases like “(Artificial Intelligence)” do not include these in the glossary. Only include phrases people are likely to say exactly like the phrase.

Emphasis can improve the accuracy of Wordly’s transcription quality by expanding how the sounds that make up a word are processed.

To add emphasis to a word, enter the word into the phrases box, add a space after the word, and either 1 or 2 exclamation marks. See the following examples:

Wordly will prioritize the correct transcription of emphasized words over non-emphasized, similar-sounding words. For example, “Porsche” might be mistranscribed as “porch” if the word isn’t emphasized.

Emphasis should be used sparingly, and only for words that are either critically important or for words that can be anticipated in advance to cause problems with transcription efforts.

). This will automatically collapse the current “Phrases” box and create another. See the example of what that looks like here: 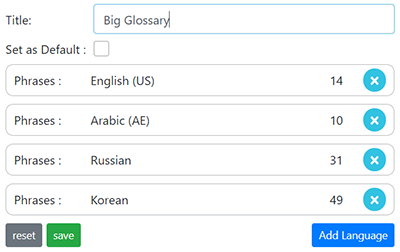 This action can’t be undone at this time.

At this point your glossary will be saved, and you’ll be able to include it when adding a session.

Was this page helpful?

Glad to hear it! Please tell us how we can improve.

Sorry to hear that. Please tell us how we can improve.